Materials and Methods: 1149 embryo images with matched clinical pregnancy outcomes (fetal heartbeat at first scan) were retrospectively obtained from 7 IVF clinics in the USA, Australia, and Malaysia. 670 embryos were known to be euploid by pre-implantation genetic testing for aneuploidies (PGT-A); the remaining 479 embryos had not had PGT-A performed. All images were analyzed by 2 independent AI algorithms developed previously. The ability to select viable embryos was evaluated using a simulated cohort ranking method, also developed previously. In brief, embryo images from different patients were randomized to thousands of simulated embryo cohorts. Embryos in each cohort were ranked according to predicted likelihood of embryo viability, and the performance of each ranking method was reported as the average number of cycles needed to select an embryo leading to pregnancy.

Results: Both viability and genetics AI scores independently correlated with clinical pregnancy rate. AI scores were significantly correlated with each other (R2 = 0.4079), but increasing genetics scores were nevertheless able to identify a higher proportion of pregnancies when applied to embryos of similar viability scores ( 5/10), ranging from 46.3% to 64.7% for genetics scores of < 3/10 and  9/10, respectively. Simulated cohort analyses showed that the viability score alone reduced the number of cycles needed to achieve pregnancy by ~20% compared to random ranking. However, when pre-selecting embryos above a genetics score threshold in each cohort, then ranking these embryos according to the viability score, the cycles needed to achieve pregnancy were further reduced by up to 5.4% (for genetics scores  9/10). Improvement over Gardner-based ranking almost doubled when pre-selecting embryos of genetics scores  9/10. Interestingly, the genetics AI was only able to improve ranking of embryos on the subset of embryos which had not had PGT-A performed; no further improvement was observed on the subset of known euploid embryos.

Conclusions: Pre-selection of embryos using the genetics AI improved subsequent ranking and selection of viable embryos using the viability AI, with fewer cycles needed to achieve pregnancy. This was only true when ploidy status was unknown, suggesting that the genetics AI may be used in a similar manner to PGT-A to pre-select embryos that are likely to be euploid followed by morphology-based selection for transfer.

Impact Statement: Euploid embryos demonstrate improved clinical outcomes over mosaic/aneuploid embryos, such as higher pregnancy rates and reduced miscarriages. However, randomized controlled trials have not demonstrated a consistent benefit for PGT-A, possibly due to biopsy damage. Alternative non-invasive methods for evaluation of embryo ploidy, like the genetics AI, may improve outcomes when used with other methods for embryo evaluation and selection. 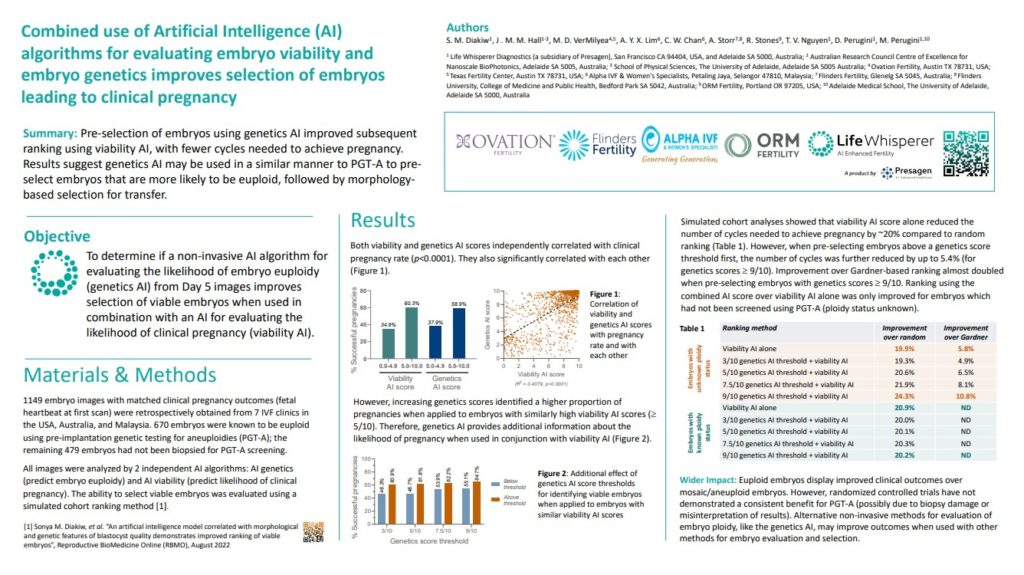