Summary answer:
The embryo stage may influence ploidy status, but no correlation was made between embryo stage and IR.

What is known already:
It is generally accepted that hatched embryos present increased vulnerability when handled and are often selected against. The literature on this varies with some reporting that the transfer of hatched blastocysts resulted in lower pregnancy rates compared to hatching or expanded blastocysts. Other studies have found no difference in clinical outcome with the transfer of hatched blastocysts compared to other stages. Reports defining the relationship between hatched or hatching blastocysts and ploidy rates are limited.

Study design, size, duration:
Retrospective analysis of IR of 224 transferred euploid embryos and ploidy rate (P-Rt) of 1431 embryos produced in two IVF labs in the United States between 2019-2021. Embryos underwent assisted hatching on Day 3 and were subjected to preimplantation genetic testing (PGT) on Day 5 or Day 6 followed by vitrification. IR was defined as the presence of an intrauterine implantation sac with the detection of a fetal heartbeat on ultrasound.

Limitations, reasons for caution:
The limited data set did not include fresh embryo transfers or the transfer of untested embryos. The inclusion of increased embryo numbers could strengthen the power of the evaluation and allow for more robust statistical analysis.

Wider implications of the findings:
Embryo selection is a multifactorial process consisting of a wide range of parameters. Numerous advances in embryo production and evaluation have resulted in the need for an algorithm or guide to rank embryos for transfer. Further investigation is warranted to elucidate comprehensive recommendations for embryo selection. 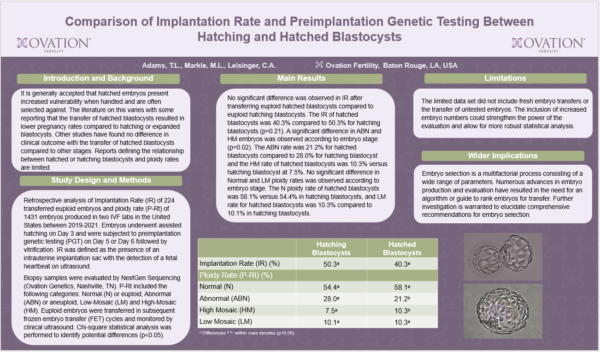