Objective: To investigate if a non-invasive AI algorithm developed to evaluate the likely genetic status of embryos at transfer is predictive of live birth.

Materials and Methods: 1827 day 5 embryo images with matched clinical pregnancy outcomes (fetal heartbeat at first scan) and live birth outcomes were retrospectively obtained from an IVF clinic in Australia. Images were provided for 1419 patients who underwent single embryo transfer between 2011 and 2017. The proportion leading to live birth was 26.4%; this increased to 34.5% when excluding pre-blastocyst stage images (n = 1066). All images were analyzed by an AI algorithm developed previously, which evaluates the likelihood of the embryo being euploid according to pre-implantation genetic testing for aneuploidies (PGT-A). Performance was evaluated using accuracy, sensitivity, specificity, and AUC/ROC. Differences were evaluated using One-way ANOVA or chi-square value as appropriate.

Results: The genetics AI score positively correlated with the probability of live birth, which increased 3-fold from the lowest (14.5%) to the highest (47.7%) scores. The AI was also predictive of live birth, with an AUC/ROC of 0.69. This was reduced to 0.64 when limiting the dataset to blastocyst-stage embryos only. The optimal threshold for prediction of live birth on blastocyst-stage embryos was a score of 7.6 / 10.0, resulting in an overall accuracy of 61.4% (sensitivity 61.4%, specificity 61.3%).
Accuracy for predicting live birth was marginally lower than for predicting clinical pregnancy on the blastocyst-stage dataset, at 62.2% (sensitivity 61.1%, specificity 62.9%). This difference was primarily the result of an increased number of false positives when predicting live birth (+36 cases), possibly due to patient medical factors contributing to pregnancy loss but not necessarily related to embryo quality at transfer. AI score was not correlated with miscarriage following detection of a fetal heartbeat.
Average AI scores were positively correlated with increasing inner cell mass (ICM) and trophectoderm (TE) grades. The probability of live birth similarly correlated with both ICM and TE grades, although this was more significant for TE than for ICM. This is consistent with studies suggesting that TE grade is an important predictor of live birth outcome, and provides further observational evidence that the genetics AI may be evaluating embryo genetic features correlated to the likelihood of live birth.

Conclusions: The genetics AI score was found to be predictive of live birth, suggesting it may be detecting morphological features correlated with genetic status that are also indicative of live birth outcome.

Impact Statement: The genetic status of an embryo at time of transfer is an important factor in determining the likelihood of successful live birth. Invasive genetic testing methods have, however, failed to demonstrate a consistent benefit in IVF, possibly due to embryo damage from biopsy. Non-invasive methods of genetic assessment, such as the genetics AI described here, may provide viable alternative methods for evaluating the likelihood of a live birth outcome. 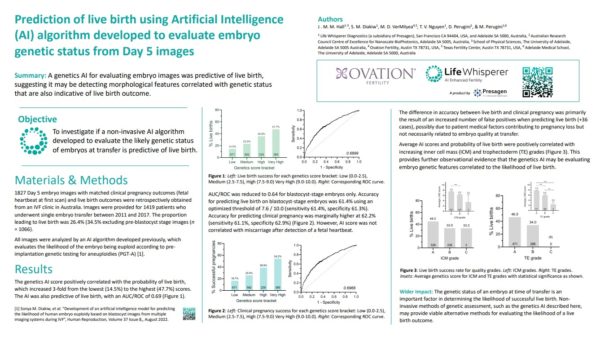