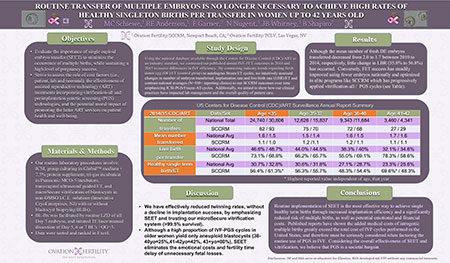 OBJECTIVE: Based on current literature, our center implemented a 100% freeze-all strategy, with almost all cycles (87.5%) using pre-implantation genetic screening (PGS) and 80-90% of our transfers being single blastocysts. Here, we evaluate the effectiveness of a clinical strategy of routine single euploid embryo transfer (SEET) to achieve acceptable live birth rates and to try to maximize the rate of healthy singleton live births.
DESIGN: The reults reported below are those reported by the US Centers for Disease Control and Prevention (CDC) for 2014. The outcome measures were live birth rate per transfer and the rate of term singleton births of normal birthweight (“Healthy singletons”).
MATERIALS AND METHODS: Routine laboratory procedures involved ICSI, group culture in single-step media with protein supplement, tri-gas incubation, blastocyst vitrification following trophectoderm biopsy/PGS. Embryo thaw and transvaginal ultrasound-guided transfer followed within 1-2 months.
RESULTS: See Table below summarizing transfers of frozen-thawed embryos. In 2014, we performed no fresh embryo transfers. An average of 1.1-1.2 thawed embryos were transferred, so that 80-90% of our transfers were single embryos. Despite the routine transfer of single embryos, the live birth rates per transfer were at least 55% in each age group, and the rates of healthy singleton live birth per transfer were at least 48%. These rates were consistently 1.5x the national averages, validating acceptability.
CONCLUSIONS: The strategy of routine single euploid blastocyst transfer following a freeze-all cycle was successful at producing high rates of live birth and healthy singleton term births, confirming no need for the transfer of multiple embryos in these age groups. These findings support the recently revised ASRM/SART guidance to transfer a maximum of one embryo following PGS. Based on these encouraging results in 2014, SCCRM’s use of PGS was increased to 99% in 2015, and the mean number of transferred embryos was further reduced to 1.0.  Overall, our goal of “one embryo-one baby” has effectively been realized.