Objective: The key factor in averting the catastrophic loss of precious gametes and embryos rests in the comprehensive implementation of quality management practices and the early detection of an unexpected failure event. The goal of our investigation was to simultaneously evaluate, interrupt and understand weight and temperature changes of induced dewar tank failures under continuous video surveillance over a 24h interval.

Design: A prospective, observational study assessed a variety of induced tank failure events monitored by real-time video, weight determination and temperature measurements following an external or internal breach of their insulating vacuum. Our aim was to characterize the nature of different tank failures and determine what alarm indicators may best provide an early warning of potentially catastrophic outcomes.

Results: The intentional destruction of all external drilled dewar tanks created an aspiration noise as room air initially warmed the interstitial space outside the inner tank. Conversely, internal drilled tanks displayed overt bubbling of its inner liquid chamber and immediate LN vaporization (within 10 sec). LN vapor streaming outside the cap and neck of the external drilled tanks was also evident within 30 sec. An external thermocouple registered 5ºC within 3 min. Ice was seen on the cap surface by 3 min, while gradual frost build-up occurred over several hours. Icing and condensation on the tank walls was apparent early on and throughout failure. A 20% evaporation detected by weight took about 4h, while the first internal temperature alarm at -194ºC did not occur until 5.5-6.5h. The ID tanks reached -170ºC sooner (+14-15h) with 65-75% evaporation compared to >95% evaporation for the ED group (+18-19h), prior to the rapid rise of temperature for both treatments (subzero by +24-25h). The ED-treated 73L tank responded similar to the 35HC tanks, but at twice the evaporation rate. The external drill size did not affect evaporation rates.

Conclusions: Tank quality and type of vacuum breach can influence the rate of failure. In all cases overt physical signs of pending failure were continuously visible for >14h before critical temperatures were reached. Overall, external quality measurements and device systems represent a promising future offering greater precision, labor efficiency, and improved specimen security/safety. 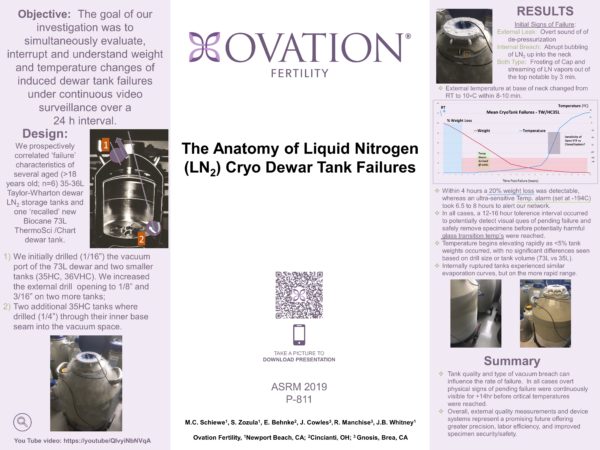